Optimizer tracing: how to configure it

octobre 04, 2011
In this blog post, my colleague Jørgen Løland described a new feature of MySQL 5.6: Optimizer Tracing. I recommend reading his article, as it presents this new feature in a simple, easy-to-read manner.

The Optimizer Tracing feature can help understanding what the Optimizer is doing; it is available since milestone 5.6.3, announced October 3rd at Oracle Open World (here is the changelog). It's good to see it mature now; I remember that Sergey Petrunia did the first prototype back in March 2009!

Today  I will be giving some must-have tips related to handling big traces.

First thing to know, a trace lives in main memory (internally it is allocated on the heap or free store of the MySQL Server). An SQL statement which gives the optimizer a lot of work (for example, by joining many tables) will generate a large trace. Up to gigabytes in some pathological cases! To avoid hogging memory then, a trace will never grow beyond the value of the @@optimizer_trace_max_mem_size session variable. Which has a default of 16 kilobytes; yes, it's a low value, to protect the innocent. I often raise it in my session, to 1 megabyte, which is enough for most queries in my daily work:


If a trace was truncated because exceeding this limit, the column INFORMATION_SCHEMA.OPTIMIZER_TRACE.MISSING_BYTES_BEYOND_MAX_MEM_SIZE shows a non-zero value: the number of bytes which could not be added to the trace.

When I read a trace I like to scroll up and down in it, search for some optimization phase (that means searching for some keyword in the trace); to do this, I set, in the "mysql" command-line client, the pager to "less" (I'm using Unix):


This is very useful. I have all "less" commands under hand: can save to a file, can search for a regular expression match, search forward or backward... One last benefit is that when I have finished reading, quitting "less" makes the trace go away from the terminal, it does not linger on my screen forever, does not occupy the terminal's display history...

When there are many tables to join, as I said above the trace can grow a lot, because the Optimizer evaluates many possible join orders (using an algorithm known as "greedy search"): each evaluated join order is mentioned in the trace. Greedy search ends up being the greatest part of the trace. What if I want to see the trace of what happens in the Optimizer after greedy search is complete? If I set @@optimizer_trace_max_mem_size to a low value, it will trim greedy search and what follows. If I set @@optimizer_trace_max_mem_size to a high value, to see what I want, greedy search will be traced which will possibly exceed the amount of memory I can afford on this machine... It would be nice if I could tell the system: "please do not trace this and that". In my case, it would be "please do not trace greedy search".

As an example, let's consider twenty tables, t1...t20, all similar to this one:


and let's run this query, after turning tracing on:
As optimizer developer, it catches my eye that some tables have "Using where" and others don't. "Using where" tells me that a condition is evaluated after fetching a row from the table, but does not tell me what condition. To know more, I will look at the trace. But I'm not interested in the trace of greedy search, which likely accounts, in this 20-table example, for most of the total trace, and would just make my reading less comfortable, or even hog memory, if I had more than those 20 tables or more indices on them, or more complex conditions. So I do:

and run the EXPLAIN again. To show the resulting trace, I'm posting a screenshot of how it is displaid by the JsonView Firefox add-on. Using this add-on requires taking two precautions:


Here's the trace now in Firefox: 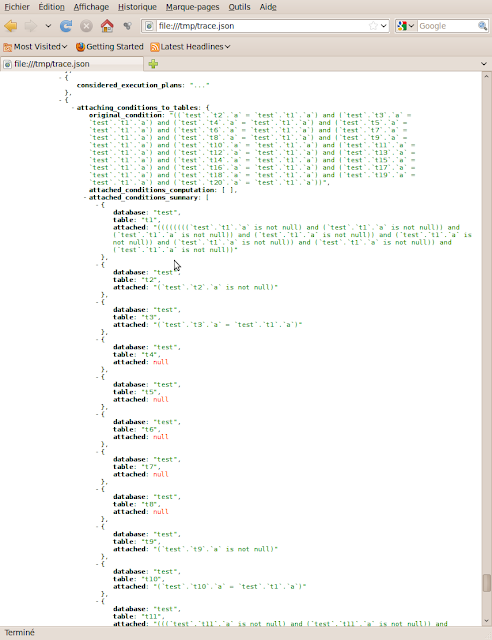 We see how greedy_search=off has eliminated the trace of greedy search ("considered_execution_plans"), replacing it with just an ellipsis ("...")! Then there is what I wanted to see: the part after greedy search, named "attached_conditions_summary", which describes what condition is behind each "Using where" in EXPLAIN. There are equality conditions of course. Some coming directly from the "JOIN ON" conditions. Some deduced by equality propagation (if t1.a=t2.a and t2.a=t3.a then t1.a=t3.a, a new condition which we see is attached to t3). There are also "IS NOT NULL" conditions; indeed, an equality condition of the form t1.a=t2.a allows us to deduce that both t1.a and t2.a are not NULL, so if rows of t1 are retrieved first they can be filtered with this deduced condition, known as early NULL filtering.

There are other flags in @@optimizer_trace_features; we added a flag for each feature which we think can make the trace grow unreasonably large:
I think I have shown enough for today. A positive note to finish: in the Optimizer team, this tracing has already helped us to debug some problems, so has started to fulfill its goal!

WITH RECURSIVE and MySQL

novembre 18, 2013
[2017 update: MySQL 8.0.1 now features SQL-standard CTE syntax; more information is here ; the entry below, from 2013, shows how to work around the absence of CTEs in older MySQL versions.] If you have been using certain DBMSs, or reading recent versions of the SQL standard, you are probably aware of the so-called "WITH clause" of SQL. Some call it Subquery Factoring . Others call it  Common Table Expression (CTE). In its simplest form, this feature is a kind of "boosted derived table". Assume that a table T1 has three columns: CREATE TABLE T1( YEAR INT, # 2000, 2001, 2002 ... MONTH INT, # January, February, ... SALES INT # how much we sold on that month of that year ); Now I want to know the sales trend (increase/decrease), year after year: SELECT D1.YEAR, (CASE WHEN D1.S>D2.S THEN 'INCREASE' ELSE 'DECREASE' END) AS TREND FROM (SELECT YEAR, SUM(SALES) AS S FROM T1 GROUP BY YEAR) AS D1, (SELECT YEAR, SUM(SALES) AS S FROM T1 GR
Lire la suite

A new, simple way to figure out why your recursive CTE is running away

janvier 15, 2020
In MySQL 8.0.1, I introduced support for recursive common table expressions (CTE). In the just-released version 8.0.19, I added an easy solution to a problem which nearly everybody meets when writing queries with recursive CTE’s: when infinite recursion happens, how to debug? You can read about it in my blog post on mysqlserverteam .
Lire la suite

avril 10, 2012
In a previous post , I analyzed how a query of the famous DBT3 benchmark was optimized by MySQL. It was this query, named "Q16" in the DBT3 jargon: select p_brand, p_type, p_size, count(distinct ps_suppkey) as supplier_cnt from partsupp, part where p_partkey = ps_partkey and p_brand <> 'Brand#23' and p_type not like 'LARGE PLATED%' and p_size in (43, 1, 25, 5, 35, 12, 42, 40) and ps_suppkey not in ( select s_suppkey from supplier where s_comment like '%Customer%Complaints%' ) group by p_brand, p_type, p_size order by supplier_cnt desc, p_brand, p_type, p_size; Here is a brief recap of conclusions I had drawn: for this query, MySQL tranforms the IN condition to EXISTS and then evaluates it with the "unique_subquery" technique, which does an index lookup into the subquery's table. IN is evaluated 120,000 times (once per combined row of the outer tables). The total execution time of query Q16
Lire la suite

Guilhem Bichot
Hi. After working for 18 years as developer of the MySQL open-source database server, at Oracle Corporation, I'm now at Huawei, working on MySQL-based cloud databases. More about me: http://www.linkedin.com/profile/view?id=14387841 .